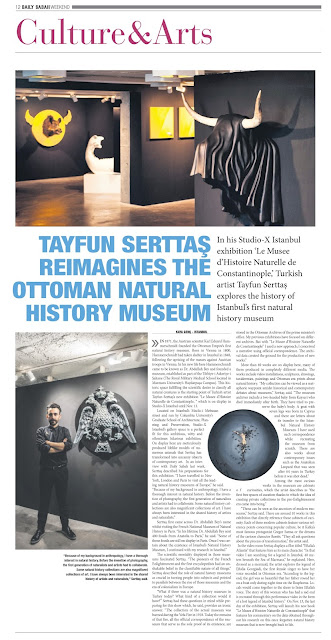 In 1871, the Austrian scientist Karl Eduard Hammerschmidt founded the Ottoman Empire's first natural history museum. Born in Vienna in 1800, Hammerschmidt had taken shelter in Istanbul in 1848, following the uprising of the masses against Austrian troops in Vienna. In his new life here Hammerschmidt came to be known as Dr. Abdullah Bey and founded a museum, established as part of the Tıbbiye-i Askeriye-i Şahane (The Royal Military Medical School located in Marmara University's Haydarpaşa Campus). This historic space fulfilling the scientific desire to classify all natural creatures is the starting point of Turkish artist Tayfun Serttaş's new exhibition "Le Musee d'Histoire Naturelle de Constantinople, " which is on display in Studio-X Istanbul until Nov. 1

"Because of my background in anthropology, I have a thorough interest in natural history. Before the invention of photography, the first generation of naturalists and artists had to collaborate. Some natural history collections are also magnificent collections of art. I have always been interested in the shared history of artists and naturalists," Serttaş said.

Located on Istanbul's Meclis-i Mebusan street and run by Columbia University's Graduate School of Architecture, Planning and Preservation, Studio-X Istanbul's gallery space is a perfect fit for this ambitious, witty and oftentimes hilarious exhibition. On display here are meticulously produced lifelike models of numerous animals that Serttaş has transformed into uncanny objects of contemporary art. In an interview with Daily Sabah last week, Serttaş described his preparations for this exhibition. "I have travelled to New York, London and Paris to visit all the leading natural history museums of Europe," he said. "Because of my background in anthropology, I have a thorough interest in natural history. Before the invention of photography, the first generation of naturalists and artists had to collaborate. Some natural history collections are also magnificent collections of art. I have always been interested in the shared history of artists and naturalists."

Serttaş first came across Dr. Abdullah Bey's name whilst visiting the French National Museum of Natural History in Paris. "In his lifetime Dr. Abdullah Bey sent 400 fossils from Anatolia to Paris," he said. "Some of those fossils are still on display in Paris. Once I was certain about the existence of Istanbul's Natural History Museum, I continued with my research in Istanbul."

The scientific mentality displayed in those museums fascinated Serttaş. "The pioneers of the French Enlightenment and the first encyclopedists had an unshakable belief in the classifiable nature of all things." Serttaş described the role of natural history museums as crucial in turning people into subjects and pointed to parallels between the rise of those museums and the era of colonialism in Europe.

"What if there was a natural history museum in Turkey today? What kind of a collection would it have?" Serttaş had these questions in mind while preparing for this show which, he said, provides an ironic answer. "The collection of the actual museum was burned during the Vefa Fire in 1918. Today the remains of that fire, all the official correspondence of the museum that serve as the sole proof of its existence, are stored in the Ottoman Archives of the prime minister's office. My previous exhibitions have focused on different archives. But with "Le Musee d'Histoire Naturelle de Constantinople" I used a new approach; I conceived a narrative using official correspondence. The archival data created the ground for the production of new works."

More than 40 works are on display here, many of them produced in completely different media. The works include video installations, sculptures, drawings, taxidermies, paintings and Ottoman era prints about natural history. "My collection can be viewed as a metaphoric waypoint amidst historical and contemporary debates about museums," Serttaş said. "The museum archives include a two-headed baby from Kayseri who died immediately after birth. They have tried to preserve the baby's body. A goat with seven legs was born in Cyprus and there are letters about its transfer to the Istanbul Natural History Museum. I have used such correspondence while recreating the museum from scratch. There are also works about contemporary issues such as the Anatolian Leopard that was seen after 64 years in Turkey before it was shot dead."

Among the most curious works in the museum are cabinets of curiosities, which the artist describes as "the first free spaces of curation thanks to which the idea of creating private collections in the pre-Enlightenment era came into being."

"Those can be seen as the ancestors of modern museums," Serttaş said. There are around 10 works in this exhibition that directly reference those cabinets of curiosity. Each of these modern cabinets feature various reference points concerning popular culture, be it Kafka's most famous protagonist Gregor Samsa or the dreams of the cartoon character Bambi. "They all ask questions about the process of transformation," the artist said. In the video room Serttaş displays a film titled "Eftalia's Atlantis" that features him as its main character. "In that video I am searching for a legend in Istanbul, 40 meters beneath the Sea of Marmara," he explained. Here, dressed as a mermaid, the artist explores the legend of Eftalia Georgiadi, the first female singer to have her voice recorded in Ottoman era. "According to the legend, the girl was so beautiful that her father rowed her on a boat only during night time on the Bosphorus. Locals would come together to the shore to listen Eftalia's voice. The story of this woman who has had a sad end is recreated through this performance video in the form of a lost legend of Istanbul history." On Nov. 13, the last day of the exhibition, Serttaş will launch his new book "Le Musee d'Histoire Naturelle de Constantinople" that features his commentary on the data obtained throughout his research on this once forgotten natural history museum that is now brought back to life. 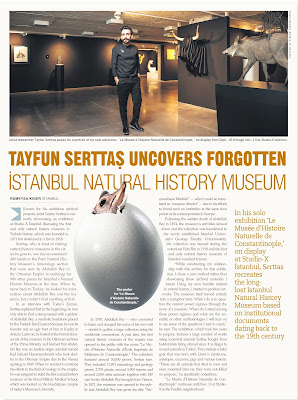