Artist and social scientist Tayfun Serttaş has revealed the near-forgotten story of Studio Osep, the leading photography studio in Turkey for decades, with a new book that synthesizes 10 years of research and presents some 6,500 archival photos. 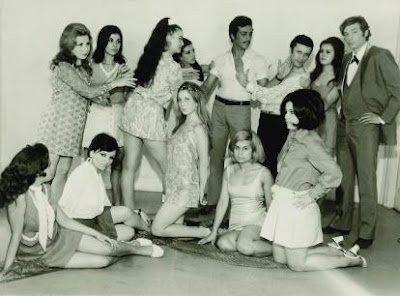 CORRECTION: An earlier version of this story omitted the origin of Minasoğlu's family.

If the story of Osep Minasoğlu – born Hovsep Minasyon to a family of Armenian origin – had not accidentally crossed the path of sociologist Tayfun Serttaş, then Minasoğlu’s 70-year adventure as a Turkish studio-photography pioneer could have been lost to history.

Minasoğlu started taking photos with an Agfa camera that his brother gave him when he was still a child. During the 1950s, he learned photographic techniques from experts at the U.S.-based Kodak Company in his spare time.

His family was wealthy. Minasoğlu received his education at Saint Benoît French School in Beyoğlu, which was attended largely by students of privilege. But a surprise awaited the Minasoğlu family during World War II: the Wealth Tax, which was issued in 1942 during the administration of Prime Minister Şükrü Saraçoğlu. This tax on the country’s rich was applied in part to discriminate against the financial independence of Turkey’s non-Muslims. Many successful non-Muslims lost their wealth, while those who failed to pay the tax were sent to work camps in Aşkale in the eastern Anatolian province of Erzurum.

Non-Muslim financial independence was similarly affected by the events of Sept. 6-7, 1955, which left a stain on Turkey’s recent history. Tension between Turkey and Greece had been increasing because of the Cyprus problem while public opinion was very sensitive toward further provocation, meaning that even the slightest spark could cause a societal explosion. This inferno duly happened.

On Sept. 6, the Istanbul Express reported that Atatürk’s house had been bombed in Thessaloniki. People rushed into the streets, attacking Greeks, Armenians and Jews over the course of two days. The Minasoğlu family was also attacked, shortly after losing its wealth in the wake of the Wealth Tax. Minasoğlu had to leave school.

Following the events, Kodak closed down its branch office in Turkey. With reference letters from the company in hand, Minasoğlu left Turkey for Beirut and traveled on to Paris.

Now, in honor of the photographer, sociologist Tayfun Serttaş has published “Studio Osep,” a Turkish- and English-language work from Aras Publishing that features the results of his 10 years of research on Minasoğlu. Furthermore, an exhibition displaying photos compiled from Minasoğlu’s archives has opened at Gallery Non in Istanbul’s Tophane district. The exhibition runs through Nov. 14.

All photos in the book and exhibition were compiled from 6,500 images found in Minasoğlu’s single-room house in Tarlabaşı. The sociologist, speaking to the Hürriyet Daily News & Economic Review, recounted the photographer’s 70-year story.

“I have been researching the life of Minasoğlu for 10 years. I spent most of my days with him, but I only realized that I was with such a legend five years ago,” said Serttaş. “Osep’s photos document Turkey’s recent history.”

Minasoğlu’s Paris adventure ended because of the 1956 war between France and Algeria; because of pressures against immigrants, he was forced to return to Istanbul. He opened a studio in Sirkeci and took tourist photos using a Polaroid camera.

Minasoğlu said the Polaroid camera was not used in Turkey during those years, meaning that Minasoğlu was able to take advantage of the technology and earn good money within a short time.

Later on, Studio Osep moved to a new location covering 350 square meters on Topağacı Street in Taksim. Minasoğlu began to take photos of future actors and actresses. Turkey’s Hollywood, Yeşilçam, gained new faces thanks to him. Fittingly for a photographer involved with actors and actresses, the studio is also remembered today as the first in Turkey to retouch photos.

Serttaş, who offers a sociological perspective on Studio Osep’s years capturing Yeşilçam, said: “Only some of the prospective future actresses who came to the studio for a photo shoot actually became famous. Osep’s skillful photos had a great share in this. However, those who could not gain fame were often sent to brothels on Cihangir’s Abanoz Street. Actually, Minasoğlu unwittingly photographed the sociology of Beyoğlu for 40 years.”

Minasoğlu not only photographed actors and actresses but also politicians and ambassadors. He is also the first photographer to shoot for pornographic magazines in Turkey. “I was not interested in women’s bodies while taking their photos, because I was a professional,” he said. “Turkey was freer in those years. There was no alienation from women’s bodies in the country [as there is today].”

Archives perished in a fire

Minasoğlu said he had never shared the secrets of his 70-year career with anyone, adding, “I used methods of lighting and retouching method while shooting Yeşilçam’s future actresses. I preferred special light for hair. I took photos in a special, large room and, in this way, I could take candid shots of the models.”

Minasoğlu kept a copy of all his photos. There were thousands of photos in his studio at the time of his bankruptcy in 1990. When his studio was repossessed, Minasoğlu entrusted his archives to one of his friends. However, as the result of a fire, all his archival documents, historically significant correspondence and technical formulas were reduced to ash.