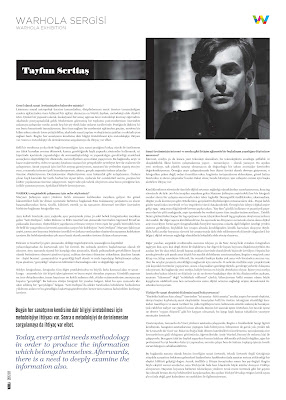 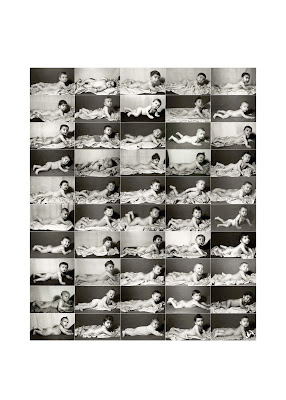 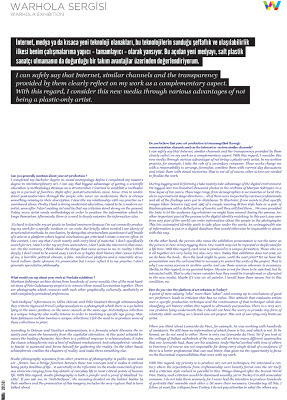 Can you generally mention about your art production?

I completed my bachelor degree in social antropology. Before I completed my masters degree in interdisciplinary art, I can say that biggest advantage of getting a scientific education is methodology. Because as a structuralist, I learned to establish a methodology in a pursuit of function. Right after post-structuralism came. Some, tries to understand post-modernism through the people who never see modernism, there is always something missing in their description. I describe my relationship with my practise as I mentioned above. Firstly, I had a strong modernist education, raised to be a modern scientist, soon after I start making art and by that my criticism stood strong on the ground.  Today, every artist needs methodology in order to produce the information which belongs themselves. Afterwards, there is a need to deeply examine the information also.

It’s hard to describe my art pratic in limited sentences because I’m not connectly producing my work for a specific medium or  an ecole. But briefly, when needed I use plenty of structuralist methods. In conclusion, by doing that structuralism questiones it self inside of it also in a platform where logical conclusions got criticised I create a mirror effect. In this context, I can say that I work nearly with every kind of material. I don’t specifically search for art, I don’t order my art from somewhere, I don’t poke the internet in that manner. On the contrary, I think about the things that came across to me in reality. I think deeply, I don’t want to be sound easy. I work on a; highly dark history that cames infront of me, a horrible political climate, a fake  intellectual platform and a miserable structured culture. Quite ofcourse it’s provocative but I never reflect it to my practise. I don’t generate speculative philosophy.

What would you say about your work at Warhola exhibition?

Maryam Şahinyan archive drives from hundreds of  scene moulds. One of the most hardest steps of Foto Galatasaray project is to connect these visual locomotives together. There are photographs which connects with each other graphically, culturally, aestheticly or with completely periodical preferences.

“Anti-Oedipus” refenrances to, Gilles Deleuze and Felix Guattari through schizoanalysis they criticize Sigmund Freud’s pshycoanalysis to a photograph which there is a 50 babies lying in the same position, on the same caouch, at the same age. Anti-Oedipus collection is a unique integrity also really intense in order to involving a specific age group. Marham Şahinyan archive involves a unique collections. I felt the need to re-produce some of these collections in print.

According to Deleuze and Guattari schizoanalysis, is a formula which liberates the insanity and saves the humanity from the capitalist alienation. At this point schizoid becames the leading character. Also there is a political response to schizoanalysis. It takes the classic schizophrenic into a level of militant revolutionist. Anti-schizophrenic –similar to fascist- is paranoid and forces himself for gathering the reality. On the other hand, schizophrenic crabbes the chapters of reality  and make them something else.

Studio photography separates from other practices of photography; is public space and art – fiction- has a bridge function between these two concepts and it makes it without being picky. Realities of life… it essentially is the reflection on the studio materials of various elements ranging from tiny details of everyday life to most critical points of human life. With this regard, studio photography is both a proofer and a proof of idealized “reality”. If you ask me, in “Anti-Oedipus”, the meaning devoted on the babies’ bodies by their mothers and the provocation of this imagery, includes the very rupture that is been talked about.

Do you believe that your art production is transmogrified through communication channels such as the Internet or various similar channels?

I can safely say that Internet, similar channels and the transparency provided by them clearly reflect on my work as a complementary aspect. With this regard, I consider this new media through various advantages of not being a plastic-only artist. In my archive projects, for example, I take the role of a secondary composer. These works charge me with a responsibility to arrange, formulize, combine them with current day discussions and relate them with visual memories. That is not all of course, other actors are needed to finalize the work.

During tagging and ID forming I take mainly take advantage of the digital environment. We tagged over two hundred thousand photos in the archives of Maryan Sahinyan in a time lapse of two years. These tags range from demographics to accessories or local rituals to supernatural stage directions… All of them were inspected by various professionals and all of the findings were put in databases. To illustrate; if one wants to find specific images taken between 1935 and 1965 of a couple wearing Briton style hats or a pair of Rayban glasses with a dotted piece of bow-tie, well they will find them… We even provided the tools to let the audience tag whatever we might have missed during the process. Another important part of the process is the digital identity matching. In this part, any user from any part of the world can enter information about the people in the photographs. This lets automated identity pools to take place under the works. An unimaginable size of information is put in a digital database that would otherwise be impossible to attain with this way.

On the other hand, the person who views the exhibition presentation is not the same as the person in New Jersey tagging them. One match may not be repeated or duplicated for a life time. With this regard, each area is produced in a unique formation. Those who see it all together are very lucky, but also very rare. Today that exhibition does not exist, yet we do have the book… then the book might be gone, until the next print? Yet we have the presentation over the web and that is necessary to protect the unity of the project. That is why I use many sources in archive works, and use those sources wherever is necessary. Media, in this regard, is my greatest helper. My aim is not for them to be watched, but be interacted with. That is why I never consider how they could be transformed or alienated in the new media. Maybe if I was an oil painter, I would have these issues. Not in this condition, no.

How do you view the platform of art criticism in Turkey?

A point of view valuing “who” more than “what”, and coming up to conclusions of good art performer, leads to criticism that has no value. This attitude that evaluates artists over a specific production technique and the continuation of that technique while also classifying art history within this regard is ultimately purposeless. There is a very serious problem lying underneath this. I should not have the worry to provide any form of relativity while working on a brand new art project. This sort of worrying only limits an artist.

When you think about Leonardo da Vinci, for example, he was working with hundreds of assistants. We still have no information of which fresco is his, and which is not. To be honest, we do not need to either. There is only one Leonardo da Vinci. Yet if you look at the ceilings of Italian cathedrals of the era, you will see how many different approaches that one Leonardo had, those are his students. Andy Warhol worked with tens of others in Farctory. I of course am not responsible for doing every single detail of a sculpture. If there is a better professional that can cast better, that gives me the opportunity to focus on the theoretical responsibilities that come with my work.

With this regard, my priority is to produce art, not art techniques. We witnessed a century where the expectations from craftsmanship were heavily forced onto the art itself. And a criticism style evolved in parallel to this. Things changed after the Second World War. Today, such criticism would be dismissed soundly, yet in Turkey it is still somewhat common. I do not take them seriously, for I never had the intention to produce hundreds of portraits that resemble each other a bit more than necessary. Considering all this, I follow at most five critiques from Turkey; I do not pay attention to what the others say.