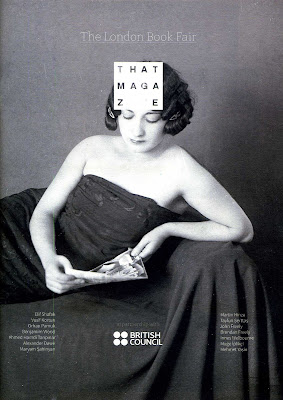 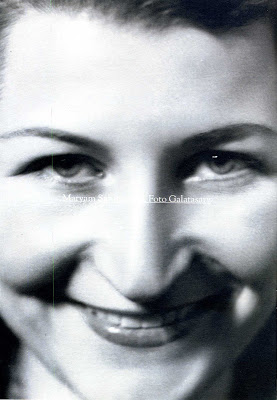 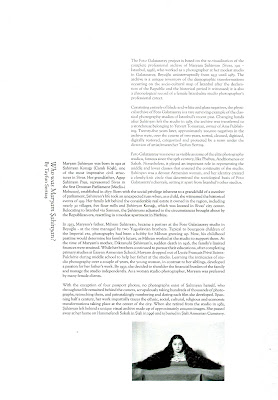 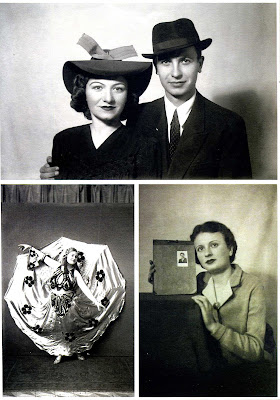 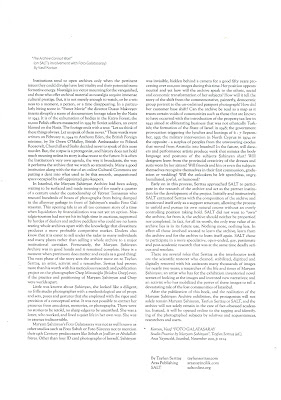 The archive of Maryam Sahinyan is neither the first personal collection of material SALT Research has been involved with nor is it likely to be the last. The particular case of Sahinyan demands uniquely different approaches to archiving, as should be the case for the transfer of any mass data from one habitus to another.  This includes considerations such as how to handle material that seems inevitable to its owner and at best quirky to most archivists, how best to form relationships between sections of the archive, and to understand how unique ecologies are inverted, re-sorted and re-configured in this transfer. Much is compromised when archive organizers loose the delicate negotiation between pre-existing generic ordering procedures and the idiosyncratic discipline of a particular set of material. New international standards, EU standards, and in general professional standards try to bring order to what can essentially remain happily in disorder.

Archives are too valuable to be categorically entrusted to institutions that preserve them in the name of public good. Such authors are handed the license to manipulate and monopolize archival discourse under the guise of scientific methods. They can comfortably perform arrogantly by keeping information from the public eye by citing their lack-of-readiness. Who bestows them the authority to do so? Certainly there is more to it than sheer custodianship or academic clout.

Institutions tend to open archives only when the pertinent issues they could divulge have lost vitality and their potential transformative energy. Nostalgia is a victor mourning for the vanquished, and those who offer archival material as nostalgia acquire immense cultural prestige. But, it is not merely enough to watch, or be a witness to a moment, a person, or a time disappearing. In a particularly biting scene in “Sweet Movie” the director Dusan Makveyev inserts abruptly a scene of documentary footage taken by the Nazis in 1943.  It is of the exhumation of bodies in the Katyn Forest; the 10,000 Polish officers massacred in 1939 by Soviet soldiers, an event blamed on the Nazis. The footage ends with a text: "Let us think of these things always. Let us speak of them never." These words were written on February 11, 1944 to Anthony Eden, the British Foreign minister, by Sir Owen O’Malley, British Ambassador to Poland. Roosevelt, Churchill and Stalin decided never to speak of this mass murder. But, the corpse is a protagonist, and history does not hold much meaning unless its story is also recast to the future. It is often the Institution's very own agenda, the way it broadcasts, the way it performs the archive that we watch so attentively. Many a good institution along with the rise of an online Cultural Commons are putting dent in what used to be this smooth, unquestioned space occupied by self-appointed gate-keepers.

In Istanbul, the Maryam Sahinyan Archive had been asleep, waiting to be surfaced and made meaning of for nearly a quarter of a century under the custodianship of Yetvart Tomasyan who rescued hundreds of boxes of photographs from being dumped in the alleyway garbage in front of Sahinyan’s studio Foto Galatasaray. This opening tale is an all too common story of a time when liquidation by financialization was not yet an option. Nostalgia-tourism had not yet hit its high-time in auctions, supported by hordes of dealers and archive peddlers who could see no harm tearing whole archives apart with the knowledge that divestiture produces a more profitable competitive market. Dealers also know that it is easier to sell under the radar to many individuals and many places rather than selling a whole archive to a major institutional caretaker. Fortunately, the Maryam Sahinyan Archive was in good hands and it remained complete. Here is a moment when patrimony does matter and excels as a good thing!

The next phase of the story sees the archive move on to Tayfun Serttas, an artist, activist and a researcher. Serttas had proven more than his worth with his meticulous research and publication project on the photographer Osep Minasoğlu [Stüdyo Osep] even if the practice and positioning of Maryam Sahinyan and Osep were worlds apart.

Little was known about Sahinyan, she looked like a diligent, no frills studio photographer with a methodological use of props and sets, poses and gestures that she employed with the rigor and precision of a conceptual artist. It was not possible to extract her presence from anecdotes, memories, or photographs. There were no stories to be retold, no sharp edges to be unearthed. She was a loner, who worked, and lived a quiet life in her own way. She was in essence indiscernible.

Maryam Sahinyan's Foto Galatasaray was not as well known as other studios such as Foto Sabah or Foto Süreyya not to mention their 19th Century predecessors like Sebah et Joallier or Abdullah frères. Other than four ID card photographs of herself, Sahinyan was invisible, hidden behind a camera for a good fifty years processing over 200,000 images during this time. Her position appears neutral and yet how will the archive speak to the ethnic, social and economic transformation of her subjects?  How will it tell the story of the shift from the commemorative, painterly, democratic group portrait to the un-ordained passport photograph? How did her customer base shift? Can the archive be read as a map as it traces certain voids of communities such as those that are known to have occurred with the introduction of the property tax law in 1942 aimed at obliterating business that was not ethnically Turkish; the formation of the State of Israel in 1948; the government provocation triggering the lynches and lootings of 6 - 7 September, 1955; the military intervention in North Cyprus in 1974; or the opposite - a surplus of peoples from the unwavering exodus that moved from Anatolia into Istanbul? In the future, will dancers and performance artists produce work that mimics the body language and postures of the subjects Sahinyan shot? Will designers learn from the provincial creativity of the dresses and suits worn by her sitters? Will friends and kin or even the subjects themselves recognize themselves in their first communion, graduation or wedding? Will the onlookers be left speechless, angry, humiliated, joyful, or humored?

Early on in this process, Serttas approached SALT to participate in the research of the archive and act as the partner institution for the development of the project. Initially and instinctively, SALT entrusted Serttas with the composition of the archive and positioned itself only as a support structure, allowing the process to unfold and pursue its own natural course without an overly controlling position taking hold.  SALT did not want to "own" the archive, far from it, the archive should neither be propertied nor completed. In fact, for all its worth, the only true value of an archive lies is in its future use. Nothing more, nothing less. In effect all those involved wanted to learn the archive, learn from the archive and for the archive to learn itself again. SALT chose to participate in a more speculative, open-ended, gay, passionate and post-academic research that was at the same time deadly serious and resolute.

There are several roles that Serttas as the interlocutor took on: the scientific restorer who cleaned, stabilized, digitized and digitally restored with his assistants many thousands of images for nearly two years; a researcher of the life and times of Maryam Sahinyan; an artist who has for the exhibition inventoried novel scenes of looking at the images and invented new narratives; and an activist who has mobilized the power of these images to tell a devastating tale of the lost communities of Istanbul.

After the publication of this book, and the realization of the Maryam Sahinyan Archive exhibition, the protagonists will not solely remain Maryam Sahinyan, Tayfun Serttas or SALT, and the archive will not solely remain in the care of fact-obsessed academics. Instead, it will be opened online to the tagging and identifying of the photographed subjects by relatives and acquantainces, researchers and users.