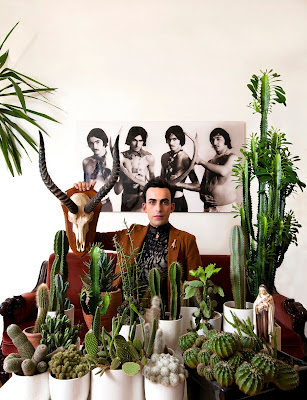 In his portrait “oto-colonial” Tayfun Serttaş questions the historical interaction between the every day life cycle and artistic applications in a parodic manner.

In this image which is made of three primary layers – distances – the artist incorporates himself by superimposing his own head onto the deer trophy at the centre of Osep Minasoğlu’s photograph in the background. On the other hand, just like the young people in Minasoğlu’s scene, by using the artificial nature – cacti – in the front layer he creates another trophy which he is holding.

Serttaş, who incorporates himself into the different layers of the decor which evokes classic studio mise en scènes set up in the corner of his house, mirrors his interest in two of his favourite pasttimes, photographs and cacti.

* Oto-colonial: It has been individualised by distorting the concept of “auto-colonialism” which is used for the process of self-colonialisation of societies or large communities.
Gönderen Tayfun Serttaş zaman: 09:59