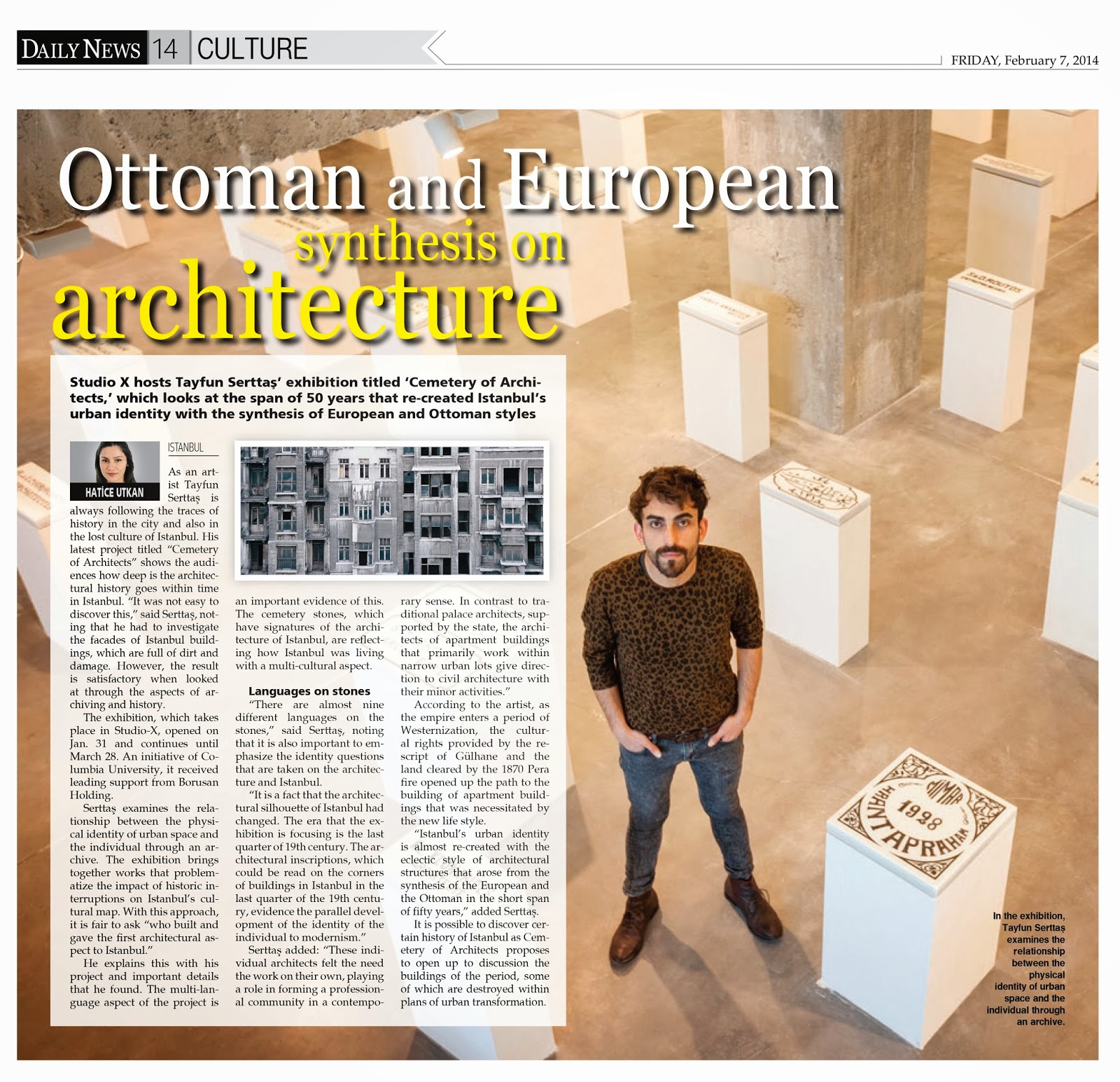 Ottoman and European synthesis on architecture

Studio X hosts Tayfun Serttaş’ exhibition titled ‘Cemetery of Architects,’ which looks at the span of 50 years that re-created Istanbul’s urban identity with the synthesis of European and Ottoman styles

As an artist Tayfun Serttaş is always following the traces of history in the city and also in the lost culture of Istanbul. His latest project titled “Cemetery of Architects” shows the audiences how deep is the architectural history goes within time in Istanbul. “It was not easy to discover this,” said Serttaş, noting that he had to investigate the facades of Istanbul buildings, which are full of dirt and damage.

However, the result is satisfactory when looked at through the aspects of archiving and history.
The exhibition, which takes place in Studio-X, opened on Jan. 31 and continues until March 28. An initiative of Columbia University, it received leading support from Borusan Holding.

Serttaş examines the relationship between the physical identity of urban space and the individual through an archive. The exhibition brings together works that problematize the impact of historic interruptions on Istanbul’s cultural map. With this approach, it is fair to ask “who built and gave the first architectural aspect to Istanbul.”

He explains this with his project and important details that he found. The multi-language aspect of the project is an important evidence of this. The cemetery stones, which have signatures of the architecture of Istanbul, are reflecting how Istanbul was living with a multi-cultural aspect.

“There are almost nine different languages on the stones,” said Serttaş, noting that it is also important to emphasize the identity questions that are taken on the architecture and Istanbul.

Serttaş added: “These individual architects felt the need the work on their own, playing a role in forming a professional community in a contemporary sense. In contrast to traditional palace architects, supported by the state, the architects of apartment buildings that primarily work within narrow urban lots give direction to civil architecture with their minor activities.”

According to the artist, as the empire enters a period of Westernization, the cultural rights provided by the rescript of Gülhane and the land cleared by the 1870 Pera fire opened up the path to the building of apartment buildings that was necessitated by the new life style.

“Istanbul’s urban identity is almost re-created with the eclectic style of architectural structures that arose from the synthesis of the European and the Ottoman in the short span of fifty years,” added Serttaş.

It is possible to discover certain history of Istanbul as Cemetery of Architects proposes to open up to discussion the buildings of the period, some of which are destroyed within plans of urban transformation.