The Press and Public Opinion: Statement About Anahit Ghazarian 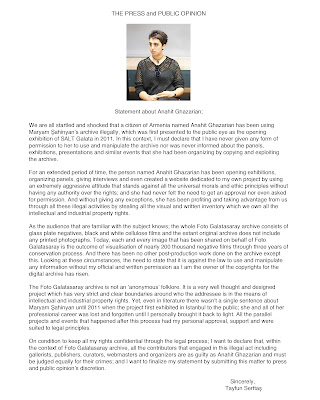 THE PRESS and PUBLIC OPINION

We are all startled and shocked that a citizen of Armenia named Anahit Ghazarian has been using Maryam Şahinyan’s archive illegally, which was first presented to the public eye as the opening exhibition of SALT Galata in 2011. In this context, I must declare that I have never given any form of permission to her to use and manipulate the archive nor was never informed about the panels, exhibitions, presentations and similar events that she had been organizing by copying and exploiting the archive.

For an extended period of time, the person named Anahit Ghazarian has been opening exhibitions, organizing panels, giving interviews and even created a website dedicated to my own project by using an extremely aggressive attitude that stands against all the universal morals and ethic principles without having any authority over the rights; and she had never felt the need to get an approval nor even asked for permission. And without giving any exceptions, she has been profiting and taking advantage from us through all these illegal activities by stealing all the visual and written inventory which we own all the intellectual and industrial property rights.

As the audience that are familiar with the subject knows; the whole Foto Galatasaray archive consists of glass plate negatives, black and white cellulose films and the extant original archive does not include any printed photographs. Today, each and every image that has been shared on behalf of Foto Galatasaray is the outcome of visualisation of nearly 200 thousand negative films through three years of conservation process. And there has been no other post-production work done on the archive except this. Looking at these circumstances, the need to state that it is against the law to use and manipulate any information without my official and written permission as I am the owner of the copyrights for the digital archive has risen.

The Foto Galatasaray archive is not an ‘anonymous’ folklore. It is a very well thought and designed project which has very strict and clear boundaries around who the addressee is in the means of intellectual and industrial property rights. Yet, even in literature there wasn’t a single sentence about Maryam Şahinyan until 2011 when the project first exhibited in Istanbul to the public; she and all of her professional career was lost and forgotten until I personally brought it back to light. All the parallel projects and events that happened after this process had my personal approval, support and were suited to legal principles.

On condition to keep all my rights confidential through the legal process; I want to declare that, within the context of Foto Galatasaray archive, all the contributors that engaged in this illegal act including gallerists, publishers, curators, webmasters and organizers are as guilty as Anahit Ghazarian and must be judged equally for their crimes; and I want to finalize my statement by submitting this matter to press and public opinion’s discretion.