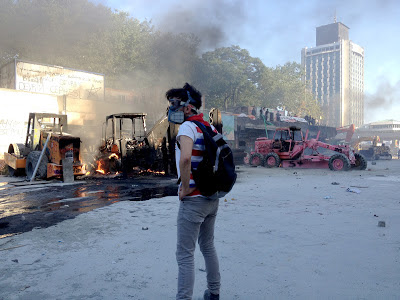 My house is only 300 metres away from Gezi Park. As a member of the neighbourhood, I was part of the resistance from the very first day. During the first three days, the police burned down our tents in morning raids and tried to block the resistance, which started with a very small group of people. As a result of our calls through social media, the protest quickly spread to the whole country and more than 2.5 million people took place in the resistance in Turkey.


When I look back at this month, the most dynamic month I have ever experienced, I realize that I saw changes take place that I had always believed were impossible. In truth, I had grown bored with Turkey. In a place where everything was linked to the economy and development, it looked like civilian initiatives were going to be much harder. We couldn’t see the economic success of the AK Party in the social and cultural spheres. But now Istanbul is once again the best place for me to live. I’m so proud of the city that I’m living in. In a way, this resistance helped me make peace with Istanbul and refreshed my trust in this city. Above all else, this resistance showed millions of Istanbulites who they were sharing their city with. This was the real thing that gives a city its honor back, a secret negotiation among its residents.
I believe we reached this ground, we can sit at the same table from now on for any common problems we encounter. This is the most important gain because the communication among the urban population was almost non-existent previously. Right now, on the other hand, in order to listen to each other’s problems we are organizing neighbourhood forums and hosting people from other neighborhoods to solve our problems together. We will gain many things from this process, but I believe the most important one will be social negotiation.

Tayfun Serttaş is an artist based in Istanbul.