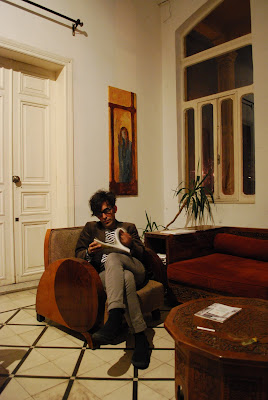 Built in 1935, located in the heart of Beirut in Spears Street, in the Sanayeh district, this charming traditional house was the family home of Moustapha Yamouth (alias Zico). Lover of the arts and culture, he started using available spaces in the building for performance rehearsals. Soon, he realized the necessity for artists to have a space where they can create and express themselves and decided to promote and help emerging artists with interesting ideas and projects, especially those who didn’t have the means to produce their own work.

After the civil war, during the early 1990’s, Zico decided to transform this spacious building from a family house into an alternative space that housed contemporary art.During this period was a time when a number of individual initiatives emerged and where Lebanon became a prime cultural location for the Arab region. Encouraged by Zico, a number of artists decided to organize a large collective exhibition in the building, making visible the work of many artists for the first time. Among others, these artists included Marwan Richmawi, Flavia Codsi, Gilbert Hage and Elie Khalife, who later became established in the field of contemporary art and film.

Following this event, Zico set up a production house with friends and colleagues, “Beirut Media Production,” with their offices based in Zico House. BMP produced the first theatre performance written by Boutros Rouhana, dedicated to Zico house. This poetic and feverish work, « Al Haris », which was closer to a form of human installation than theatre, provided Zico House with its main mission: to defend experimental Lebanese art.
Gönderen Tayfun Serttaş zaman: 16:55