SALT, the Istanbul-based nonprofit that launched in April 2011 with the mission to "explore critical and timely issues in visual and material culture," will open a second space in the city on Nov. 1. Located in the central commercial Galata neighborhood, the new space will have a library and hold the archives of art, architecture, design, urbanism, social and economic history maintained by SALT. It will also include almost 11,000 square feet for temporary exhibitions, an auditorium, and rooms for workshops and conferences, plus revenue-generating amenities. 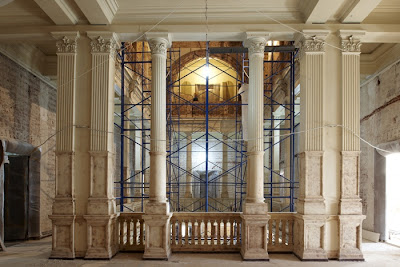 SALT Galata will open with three exhibitions: "Scramble for the Past: A Story of Archaeology in the Ottoman Empire, 1750–1914," "Researcher and Artist: Tayfun Serttaş" and "Modern Essays 3, Modernity Unveiled / Interweaving Histories, Gülsün Karamustafa." The first is a historical exhibition with contemporary commissions. The 29-year-old Turkish atist and writer Serttaş's show comprises images of Istanbul from 1935–1985 by Maryam Şahinyan. The third project is an installation by Karamustafa, and reflects on the story of Margaret Schütte-Lihotzky, the Austrian architect who relocated to Turkey in 1938, in exlile from fascism.

The 19th-century building, owned by Garanti Bank, was designed by the French architect Alexandre Vallaury to house an Ottoman bank that was later incorporated into Garanti—which founded and funds SALT.

The building has facades in two architectural styles-the one facing west is, appropriately, Neoclassical, while the one facing east has Byzantine features. Refurbishment of the building, which has been subject to numerous architectural interventions since the 19th century, is being undertaken by Mimarlar Tasarım Danismanlik Ltd, the studio of the architect Han Tümertekin, who received the Aga Khan Award for Architecture in 2010. The new design aims to eliminate those parts added after 1862, bringing back the original character of the building with its Neoclassical staircase, white columns, big wooden windows and red marble fireplaces.

The organization's first space, SALT Beyoğlu, opened in April on İstiklal Caddesi, one of the busiest streets in the commercial and cultural center of Istanbul. Its five-floor building includes 13,000 square feet of exhibition space, a walk-in cinema, a café and a shop.