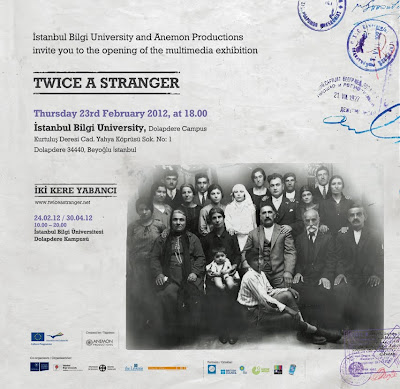 What is Twice a Stranger?

‘Twice a Stranger’ is a cross media project about the greatest forced migrations of the 20th century, when millions of people were uprooted and moved to new homelands.

Based on oral video testimonies, rare film archives and photos this project brings visitors face-to-face with the survivors of these traumatic events. From the Greek-Turkish exchange in 1923, ‘Twice a Stranger’ travels to the German-Polish forced migration at the end of WW II, to the Partition of India, and to the Cyprus crisis of the 1960’s and 70’s.

‘Twice a Stranger’ is distributed online and via a multi-media exhibition, hosted at the Benaki Museum in Athens, the Leventis Municipal Museum in Nicosia and the Bilgi University in Istanbul.