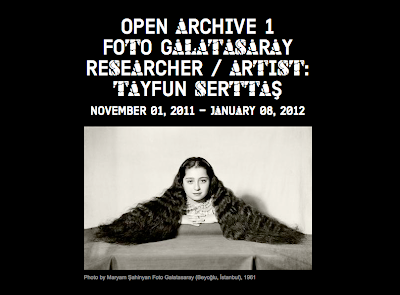 The Foto Galatasaray project is a revisualization of the photographer Maryam Şahinyan’s studio archive that was located in Beyoğlu, İstanbul. Taken over a 50 year period, from 1935 to 1985, her photographs now represent a unique and muted register of the extensive shifts in ethnic demographics and socio-economic transformation that took place in İstanbul. Significantly, the Şahinyan archive expresses the progressive documentation of the half-century long career of one of Istanbul’s few female studio photographers.

As one of the rare and genuine photography studio archives in İstanbul Foto Galatasaray consists entirely of black-and-white glass and film negatives. A decade after Şahinyan’s death the archive was taken into the possession of Yetvart Tomasyan the owner of Aras Publishing House that publishes books on Armenian literature and culture. In late 2009 Tayfun Serttaş took over not only the role of cleaning, digitization, digital restoration and categorization of nearly 200,000 images, but also the position of making meaning out of this massive collection of data. The process has been carried out by Serttaş together with a team at SALT, with additional support provided by the Bohen Foundation.

As the inaugural project at SALT Galata's Open Archive, Foto Galatasaray rolls out different readings of 20th century İstanbul. The exhibition aims to stimulate a critical assessment of social memory that is under the sway of historical ruptures and prescriptive approaches.

Aras Publishing House will issue a comprehensive publication edited and in part written by Serttaş. The archive will be open online to the public in 2012 for acquaintances of Şahinyan and her studio to participate in the identification of the sitters.

Selected projects of SALT Research are presented in exhibitionary formats at SALT Galata's Open Archive. The Open Archive project explores possible relationships between archives, democracy and transparency. SALT supports the notion that archives can be revolutionized on distributed networks and with the participation of a multitude of users. The archive is never "complete" and is of value only when offered to public use.
Gönderen Tayfun Serttaş zaman: 00:48