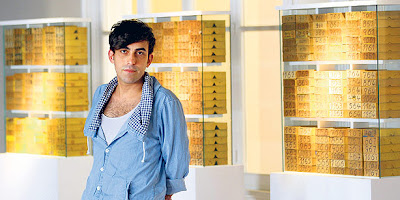 A new exhibition by Tayfun Serttaş at the recently opened SALT Galata art center in İstanbul's Karaköy district offers a fascinating visual exploration of five decades of life in mid-20th century İstanbul from the perspective of a Beyoğlu photo studio.

The exhibition, titled “Open Archive 1: Foto Galatasaray,” is a collection of photos from the archive of Armenian studio photographer Maryam Şahinyan. Şahinyan learned the art of photography from her father and worked at her own studio, Foto Galatasaray, for 50 years. She took black and white pictures for hundreds of people with a wooden bellows camera. When she retired from her studio at the age of 74, some 200,000 of her glass negatives were transferred to a storage space owned by Yetvart Tomasyan, the owner of Aras Publishing House. The archive of Foto Galatasaray remained untouched in boxes at Hıdilyav Palas for several years before researcher and artist Serttaş embarked on an ambitious project to organize the entire archive. The results of his efforts are now on display on the third floor of SALT Galata.

The centerpiece of the exhibition is a curtained area in which 10 of Şahinyan's images are displayed on screens and arranged by theme. These images change every five seconds. “This part of the exhibition is helpful for quickly understanding the general character of the show. If you see ten naked babies photographs on the cloth, that means there are 1,000 similar images in the whole archive. There are also images of little boys dressed in cowboy costumes, which was very popular after the 1970s because of the influence of Western movies,” Serttaş explains in an interview with Sunday's Zaman, adding that the material is “extremely important for the sociology of everyday life.”

While the photographs feature a diverse collection of portraits of people, the archive is a particularly rich resource for exploring the lives of women. The artist notes that female models felt comfortable in Şahinyan's studio because she was also a woman. “If you think about the conservative atmosphere of the time, Şahinyan's gender was very important. Many women came here and let down their hair, showed their neckline, their underwear or their naked bodies because the photographer was a woman. Around 90 percent of the photographs feature women,” he adds.

In 2009 Serttaş displayed another archival project titled “Studio Osep” which delved into the biography of Armenian studio photographer Osep Minasoğlu via remaining photographs from his archive. For Serttaş, these archives are very important because they comment on many things that are still being discussed in contemporary art. “The angle from which you approach photography is the important thing here. I am neither an archivist nor a photographer; I am freeing these archives from the narrow framework of photography and bringing them to a more independent artistic sphere,” he emphasizes.

For Serttaş it was important to make the exhibition available to the audience on their own terms. “The archives enable you to draw a cultural map of a city. A filmmaker, a gay person, or a fashion designer would all approach this material from entirely different angles,” he notes. The exhibition facilitates this diversity of perspectives by providing computers on which viewers can navigate the archive on their own, rather than merely observing the material through the artist's chosen framework.

Serttaş also plans to upload the archive to the Internet next year in order to allow people to identify the subjects in Şahinyan's photographs. “The sons and daughters of most of the people we see here are not in İstanbul anymore, they are mainly spread throughout the Turkish diaspora. If the people in the photographs are properly identified on the Internet, it will be more convenient to reach them,” he says, adding: “We do not know which photographs are more important than the others and we will only learn this in time. We do not know who these people are. Right now we are looking at some people and they are looking at us, but we have not yet been introduced.”

The opportunity to engage with such intimate documentation of so many human lives presented in Şahinyan's archive was bound to catch Serttaş's attention as he was a student of social anthropology at the İstanbul University. He also wrote his master's thesis “Photography and Minorities in İstanbul in the Context of Modernism and Cultural Representation” at the Yıldız Technical University art and design faculty. Beyond this academic background, Serttaş has also sought instruction on the technical aspects of glass negatives in a workshop at the Arab Image Foundation in Beirut, where he learned how to correctly handle archival materials. He subsequently cleaned the entire archive, plate by plate. This painstaking process is documented in a video by the artist that is included in the show, along with two other videos: One features Tomasyan explaining how he came to own Şahinyan's archive, and another features several of Serttaş's assistants as they helped him to sort, clean, digitize, digitally restore, categorize and preserve the archives during the last two years.

Aras Publishing has also released a bilingual book titled “Foto Galatasaray: Studio Practice by Maryam Şahinyan” alongside the exhibition, with an introduction by author Karin Karakaşlı and curator Vasıf Kortun, who is SALT's director of research and programming. The book features writings by Serttaş and 950 photographs from the archive.

Texts by Serttaş include Şahinyan's biography and the history of the studio, and analysis of the archive with several articles about Armenian culture, female and religious identity, cultural representation, gender, migration and fashion, among other topics.

“Open Archive 1: Foto Galatasaray” will run through Jan. 22. For more information on the artist, visit www.tayfunserttas.com and tayfunserttas.blogspot.com.

“Scramble for the Past: A Story of Archaeology in the Ottoman Empire, 1753-1914” at SALT Galata

Featuring nearly 40,000 books on art, architecture, design, urbanism and social and economic history, SALT Research is located in the 650-square-meter central atrium of SALT Galata. “Designed by Şanal Architecture Planning, this space was specifically developed to respond the demands of its users. We are planning to advance its content with the participation of the users,” explained Sezin Romi, from SALT Research and Programs, adding that it is not like a standard library in which a holy silence is expected.

“In the entrance, periodicals and new publications greet the users. Right after these, we see the heart of SALT Research: the files of more than 200 contemporary artists together with curator, institution and exhibition archives. We are conducting serious research in order to build an artistic memory in Turkey. We are planning to stretch all the way back to the 1970s and 1980s. Right now we are working on a book project from the writings of Nilgün Özayten, art historian and former manager of the Atatürk Cultural Center's gallery between 1985 and 2000,” Romi adds.

SALT Research includes many physical and digital documents, including the Ottoman Bank archive, the Hüseyin Bahri Alptekin archive, the Italian Embassy archives, the Saint Pierre archive, the Sedad Hakkı Eldem archive, and the World Council of Churches archive. It also features an area for viewing, production and sharing, where visitors are invited to edit multimedia art works and conduct group work on a reservation basis.

SALT research is open to everyone between Tuesday and Saturday and all its services are free of charge. For more information, visit www.saltonline.org. 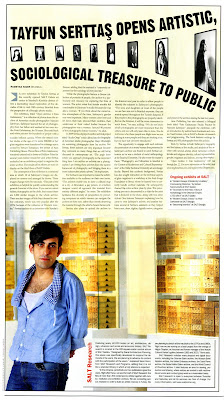